Your Excellency,
the President of Ethiopia 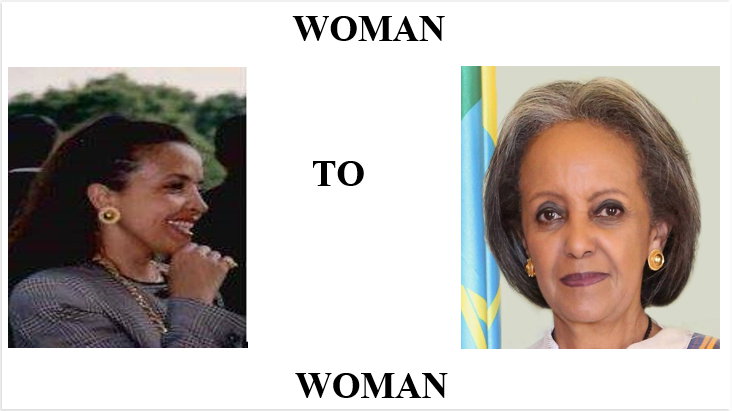 Your Excellency, the President of Ethiopia Madame Sahle-Work Zewde.
by Kiki Tzeggai

Your Excellency, the President of Ethiopia Madame Sahle-Work Zewde.

My name is Kiki Tzeggai and I am from Eritrea. I would like – first – to congratulate you for being the first Ethiopian woman to serve as head of state of your country. Ms. Zewde, I am writing this letter with the strong belief that we both – as women - found ourselves in the same sorrow by the making of history. My aim and wish is to communicate with you and forget about the first impression. If only you and I could forgo about protocol and diplomacy and choose to sit down at the edge of any given piece of land where both our countries meet, let us imagine Badme or Serha and Zalambessa.

If women – such as us - delay the “meeting” with each other, it would be the equivalent of twisting the knife in the open wounds of our people in villages and cities. It would mean ignoring the pain of our farmers deprived of their land and our young generation walking a journey of pain, exploitation and a dark future made darker for lack of women-to-women communication and work for a better future.

I have never met you, but I read extensively about you and I dare to affirm that you, as a woman, earned your entitlement to live in dignity and freedom from any fear. In Ethiopia as well as Eritrea, gender equality should be - primarily - a birthright. Empowering women is an indispensable tool for advancing development and reducing poverty. Endowed women contribute to the health and productivity of whole families and communities and to improved prospects for the next generations. Yet, discrimination against women and girls, gender-based violence, economic discrimination, reproductive health inequities and harmful traditional practices - remain the most pervasive and persistent forms of inequality. Women and girls bear enormous hardship, especially following armed conflicts. The latter being one that affected both our countries. Eritrea fought for its independence from occupation by past Ethiopian regimes. Ethiopia suffered as well by the atrocities inflicted by the last communist regime towards its own people. My letter is not one of political standing, but one trying to reach a place where you and I – woman to woman – could agree trying to find a common understating, such as a reality that I cannot live peacefully without you and you cannot live peacefully without me.

There have been several organizations advocating for women rights, promoting legal reforms and gender-sensitive data gathering supporting projects that could improve women's health and expand their choices in life. However, no one can achieve more than women standing together can. This world is filled with history of one country occupying another and women taking a role in wars that brought pain among people. Nevertheless, we should remember that women played a high role in both defending their rights and protecting their families, as well as stretching a hand to meet the woman beyond borders. Could that be a dialogue you start in Ethiopia? In addition, could that be a speech you will offer at the podium of the United Nations? History will remember you as the first woman president of Ethiopia, but all the afore-mentioned hopes might add to print your name in gold letters for a prize more cherished than a Nobel prize, that being a messenger of peace and empowering women, no matter where our origins might be. I followed an interview you did with a French Television channel, in which you listed your hopes of empowering women in Ethiopia; of advancing the health sector in Ethiopia. I closed my eyes, listened to your voice speaking of a love for country we both share, and made your dreams mine and placed them in Eritrea, from North to South and from East to West. I was listening to a woman in charge of her country and I wanted any Eritrean woman to aim at the same achievements in Eritrea; yet my own reality, as an Eritrean woman, is that discrimination against my country’s women and young girls, includes so much pain as a result of a liberation war that lasted over fifty (50 ) years. I do not look at you as the one personally guilty of my husband’s death by torture at the hands of Ethiopian soldiers during the occupation of Eritrea. I do not look at you as the person responsible for my children’s tears or the hard questions I could never answer. However, I ask you - woman to woman - to look at me and many Eritrean women still crying and not being able to lift themselves from the ground up. If I try to help my fellow Eritrean women , I need your support and moral understanding to help lifting women behind your borders and far away from your house’ windows! There is nothing you could do for peace in Ethiopia if you decide to ignore us, because we exist and our pain is real! Equality - beyond borders - among women need to exist. Distribution of power seems to have started in Ethiopia, while we – Eritreans – are struggling to achieve it and we know that we will! However, equality in moral responsibilities and bowing to the grave of Eritrean Martyrs is one duty - I strongly believe - you should assume. I hope that you and I will be laying a wreath of flowers at the mass grave where your country’s soldiers threw the remains of my husband. His only crime was to love me, our kids, his mother and our land! That the Ethiopia you lead needs to diagnose and honour our pain and once (I refuse to say IF) we reach there, I promise to hold your hand before holding my own kids’ hands and make sure that the history of Eritrea will mark your name in gold letters as well. Woman-to - woman, we can make it! Yes, we can! Give me hope that among your many plans for Ethiopia, feeling sorrow and accepting Eritrea’s unfair occupation by past regimes of Ethiopia has caused pain to families like mine and you do feel for us. Eritrean women wrote the “Declaration of Independence” with their own blood and they used their found “freedom” from a very conservative society as template and ingenious way to open men’s eyes and force them to expand their empathy towards women causes. We are now leading the way for our young generations to make our struggle a model for imminent women’ rights treaties in our future Eritrea. In both our countries, more women than men live in poverty; economic disparities persist partly because of wars and much of the unpaid work within families and communities falls on the shoulders of women, because they face discrimination in the economic sphere. Educational empowerment is a disparity in Ethiopia and Eritrea; about two thirds of the illiterate adults in our countries are females. Higher levels of women's education are strongly associated with both lower infant mortality and lower fertility, as well as with higher levels of education and economic opportunity for their children. Political empowerment, legal institutions still do not guarantee women equality as human rights. Access to or control of land or other resources, salaries earning, social and political participation … the list goes on, and only women empowering and respecting one another can turn these realities to positive ones. Laws against domestic violence are often not enforced on behalf of women. Experience has shown that addressing gender equality and women’s empowerment requires strategic interventions at all levels of programming and policy-making. What about you and I agree on the aforementioned basic problems and try to find a solution together, by first sitting side-by-side, you acknowledging my pain and I respecting your ability to assess and initiate things independently? How could we if I am still trying to put together the pieces of my heart and you are not acknowledging my pain your country’ soldiers created for no valid human and more reasons?

No matter how hard we both struggle for justice independently, we share the same solitude! There will never be a magic formula offered by politicians, only unity among women will bring a permanent peace between Eritrea and Ethiopia.

Drawing closer will make us discover that women across our borders are beautiful and helping them look at their outer shell will be our shared achievement! Political and diplomatic speeches on television come across as trope, a path-trodden as deep as the mysterious reasons that triggered the Badme war. Sometimes the political leaders’ words are letters that stay into “our” territory and sound awful and in the depth of our despair – as women – our lives implode! The missing step in a staircase to reach peace is women unity! Any unsettled feelings among Eritrean and Ethiopian women need to be solved by us; we need to unlock the doors to our safe-haven and eliminate political smoke.

The road I ask you to take with us - Eritrean women – is the road to a product of war and it is not easy! However, it is an objective well worth pursuing for the sake of others.

I would like to conclude my letter to you by quoting the great Abigail Smith Adams “Regards us then as being placed by the Providence under your protection and imitation of the Supreme Being; make us of that power only for our happiness”. A quote I hope to read with you and make ours in a near future when sharing a handshake, a tear and feeling a breeze of nostalgia for those who left us. I hope it will happen soon.

Michael Jackson - We Are The World (HQ)