The need for the
“enough is enough movement”
to play a leading role
in the advocacy campaign. 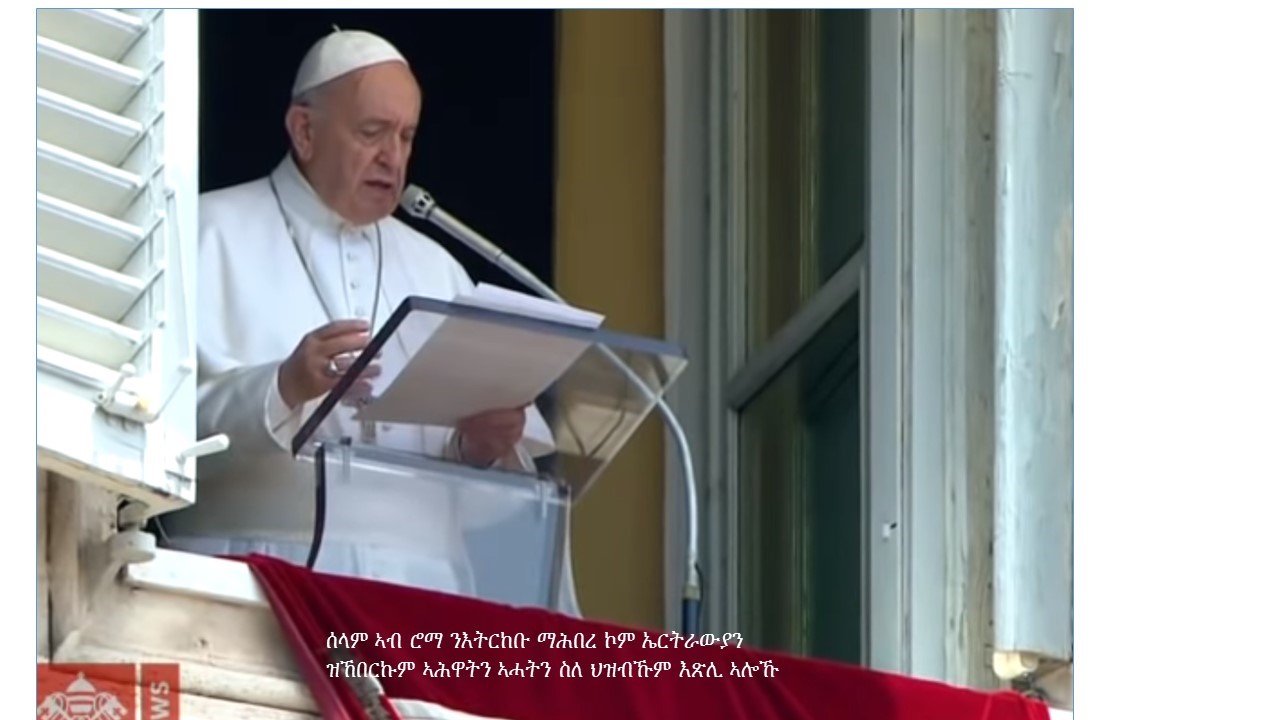 The need for the “enough is enough movement” to play a leading role in the advocacy campaign.
By Petros Tesfagiorgis

On 29 July The Catholic Herald reported, “Following what has been described as ‘the worst Mediterranean tragedy’ this year, Pope Francis appeals to the international community to ensure the safety and dignity’ of migrants.”

There is a serious political, economic and social changes reshaping the Horn of Africa. The most significant is the rise of Prime Minister Abiy Ahmed (PMAA) of Ethiopia and the campaign for peace he initiated. His call for peace was accepted readily by Isaias Afwerki. Soon the border with Zalambassa/Ethiopia was opened and people from both sides rushed to the border and showed lots of emotions as they kissed and embraced each other. Trade flourished between the two countries and Eritreans benefitted from purchasing of Taff, bread and other commodity goods at a cheaper price. The world has witnessed when Peace dividend shines. Unfortunately the Eritrean regime has closed the border again.

The fact that PMAA released all political prisoners gave hope to the people in Eritrea that Isaias will be persuaded to do the same. That did not happen. In Eritrea, no prisoners of conscience have been released and human rights violations continue unabated. Isaias squandered the best opportunity he got to reconcile with the people of Eritrea.

It has been proved beyond any reasonable doubt that Isaias’s intension was only to end his isolation, prolong his stay in power and win friends internationally. To that effect, the arms sale embargo against Eritrea is lifted. Eritrea has become a member of the UN Human Right Council. Furthermore, the regime has lobbied to end the mandate of United Nations Human Rights special rapporteur for Eritrea during the 41 session. This time they failed. The representatives of the Human Rights Council voted to continue the mandate of the UN Special Rapporteur (SR) for Eritrea. The strong lobbying that was launched before the meeting, including a letter signed by 32 organisations must have helped a lot. The SP is expected to request a visit to Eritrea and the prisons.

But there were areas where things went badly for Isaias. When freedom of press was abolished on 18 September 2001, the regime ushered in the dark world of disinformation. The most damaging one is the extension of the national, the slave labour, from 18 months to an indefinite period. The excuse was to counter “the threat of TPLF Invasion” and to guard the border area” but the ulterior motive was to control the youth. With the peace and opening of the borders there is no need of indefinite national service but there is no sign to end it. Isaias disinformation tactic was exposed. It has become crystal clear to the people of Eritrea that Isaias does not care about the people. Even supporters of Isaias are aware of these facts. They are turning against him. Isaias is in deep trouble.

Today the people of Eritrea have realized that Isaias has presented them with a formidable challenge.

It goes without saying that they are rising up to the challenge. They have started a powerful movement saying “enough is enough the regime has to go” Their voice has reverberated all over the world. The most dramatic is the one that happened in Washington. A popular movement composed of 35 US cities was set in motion. Every city sent 3 representatives and they chose an executive committee of 7 members. Their message of rejecting the rule of Isaias is echoing all over the world and even the Ethiopian Social media is covering it. At home, there is an underground movement labelled “Zur Fenkil” that is calling the youth to refuse serving the indefinite national service. The same movement is taking place in other parts of the world.

Isaias is so shaken he is stepping up violations against anyone who thinks they are a danger to him. The Catholic Church has been advocating for the welfare of refugees and calling Eritreans to extend a helping hand to refugees in distress. Some years ago they distributed a brochure titled “Where is your brother,” detailing the pains and sufferings of the people of Eritrea, particularly the refugees and reminding Eritreans that they have the obligation to help and care for them. It was powerful and touching. In retaliation, Isaias has closed 22 health centres run by the Catholic Church. As a result, the regime is denying more than 200,000 people access to health care. This may represent a crime against humanity.

Inadequacies of Advocacy Campaign: However, the campaign to oppose the closure of health centres has been inadequate. It is sad to observe that the powerful voice of the newly formed “Yeakel” (enough is enough Isaias has to go) movement is missing. The closure of health services concerns the international community as well, especially World Health Organisation (WHO). Concerted campaign to re-open the health centres could have encouraged the WHO to demand the opening of the clinics. Informing the international community by demonstrations and distributing leaflets is the best way to expose how brutal the Eritrean regime is. This could have given a strength to the victims inside Eritrea who are rising up for democratic change.

However, there are some members of the Diaspora who are actively campaigning to expose the closure. For example, the Eritrean community in Rome carried out a demonstration and appealed to Pope Francis for help. The pontiff has expressed solidarity with the victims saying, “I will pray for your people.” He also has kept raising the issue in other occasions as reported by the Catholic Herald.

Credit also to Eritrean for Unity and Justice who organised a demonstrators in London. Our organisation, Eritrea Focus, did its part to get it raised in the parliament during question time. The Foreign Office spokesman said they will give a reply in 20 days although I don’t expect the UK Government will have the time and the will to get concerned about Eritrea. It is fully engaged in the sensitive issue of getting divorced from the European Union.

The other remarkable thing is that during the hearing of religious persecution in the White House, the Singer Helen Berhane informed President Trump of the serious religious persecutions taking place in Eritrea. She said she was detained for 32 months in a container. She mentioned to the President the imprisonment of Abuna Antonius, the Patriarch of the Orthodox Church. President Trump shook her hand in appreciation. Subsequently the USA vice-president, Mike Pence, called on the Eritrean Government to release Abuna Antonius.

Similarly, when 40 out of 90 Eritreans who demonstrated in front of UNHCR in Cairo were arrested, Aba Mussie Zerai wasted no time in contacting the UNHCR to appeal to the Egyptian Government for their release. At the same time, Helen Kidane who is fully engaged in coordinating advocacy campaign from London is in touch with Eritrean refugees in Egypt. She circulated the message that they were in court on 7 August 2019. “The judge ordered to release the 5 with a guarantee of 500 LE for each of them. But the prosecution made an appeal and the decision has been revoked a new hearing was set on10/08/2019.

On Thursday, 25 July 150 refugees, mostly Eritreans drowned in the Mediterranean Sea. The tragedy could have been avoided had the Italian Government not prevented rescue ships from saving refugees in distress. In this case, appeal to the European Union looks the best way forward.

However the voices such as that of the pope and Human rights groups must have made a difference. Because France is sending rescue ships to the Mediterranean Sea.

There is a new case of closing a health centre in a village called Glass. This is covered by Martin Plaut- in his article titled “The bravery of a Catholic priest” https://eritreahub.org/the-bravery-of-a-catholic-priest

I quote “In the middle of the night, about two weeks ago, some officers (probably from the nearby military camp) came and suddenly tried to force the main door of the clinic open. Father Thomas, who was awake, came down and asked the soldiers what they were doing there so late at night. They told him that they had been sent by their superiors and he should mind own his business.

In that instant Father Thomas acted. He went and rang the church bell. The villagers poured out of their homes to see what was happening. When they arrived at the scene they protested. The soldiers had no option but to retreat to where they had come from.

Two days later, another set of officers came. This time they arrested Father Thomas and put him into detention. He was released after a two-day incarceration.

By now it has become normal for the Eritrean regime to close health centres and escalate rounding up the youth to send them to SAWA. Unfortunately we, the justice seekers, seem to accept it as normal and do nothing. To persistently advocate against the closure of health centres and against the continuations of indefinite national service (slave labour) and other forms of violations are practical demands of activism. They shine a light on the work of justice seekers. It is also a learning process in understanding Transnational Activism. In this mission the mass association of EPLF did very well. The mass associations were the ambassadors of the people’s struggle in Eritrea. As a result the diplomatic, political and financial (humanitarian support was enormous.

The justice seekers need to define their priorities and engage in campaign activities. I hope the management committee of the USA “Baito” in Washington and in other places in Europe, Canada, and Australia, draw an action plan (Road map) that guides their activism. Once they organises in such way it makes easier to coordinate global demonstration on specific serious issues. It is fundamentally crucial that the Yeakel movement puts the pains and suffering of the people at the centre of the advocacy campaign. For Serious work the association must be institutionalized. Members must pay small membership fees. There must be an office and full or part time paid workers.

In conclusion “The need for the “enough is enough movement” to play a leading role in the advocacy campaign is essential.

N.B
1. Fresh News: Helen got a message that the hearing of the 5 detained Eritrean refugees took place today 10/08/2019 as scheduled. Once again it has been postponed for 15 days. She said. “We need to keep pushing.” Yes. It is time to use the voice of the “Yeakel to campaign their release outside the Egyptian embassies.


'We Are Coming' By Artist Hussain Mohamed Ali: