Remembering Berhane and ALL Eritrean fathers murdered by Ethiopia 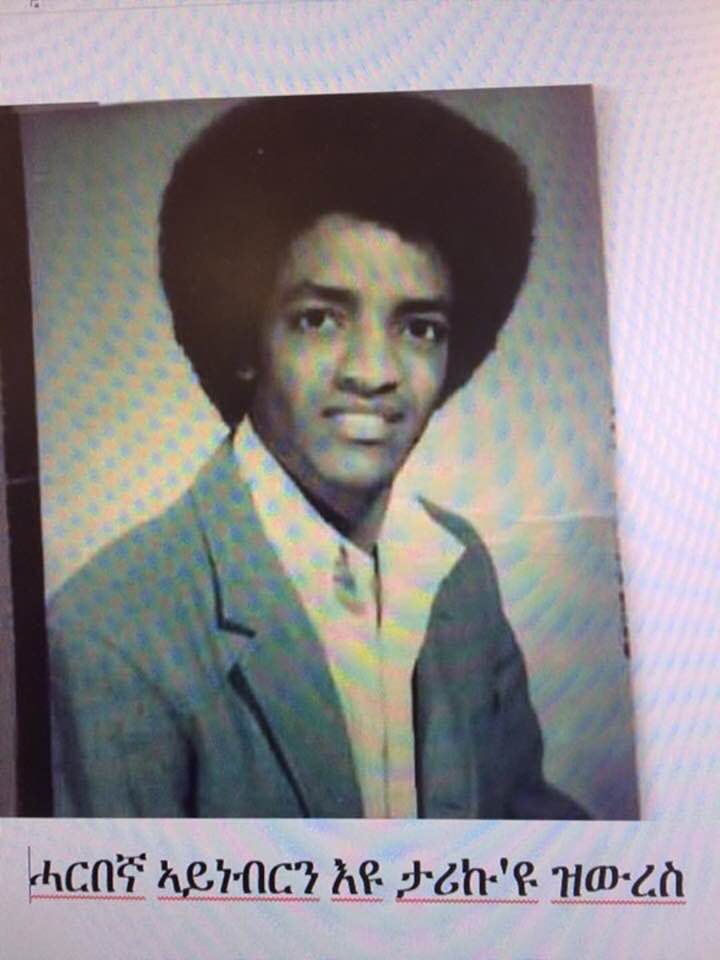 “Out of suffering have emerged the strongest souls; the most massive characters are seared with scars.” ― Kahlil Gibran 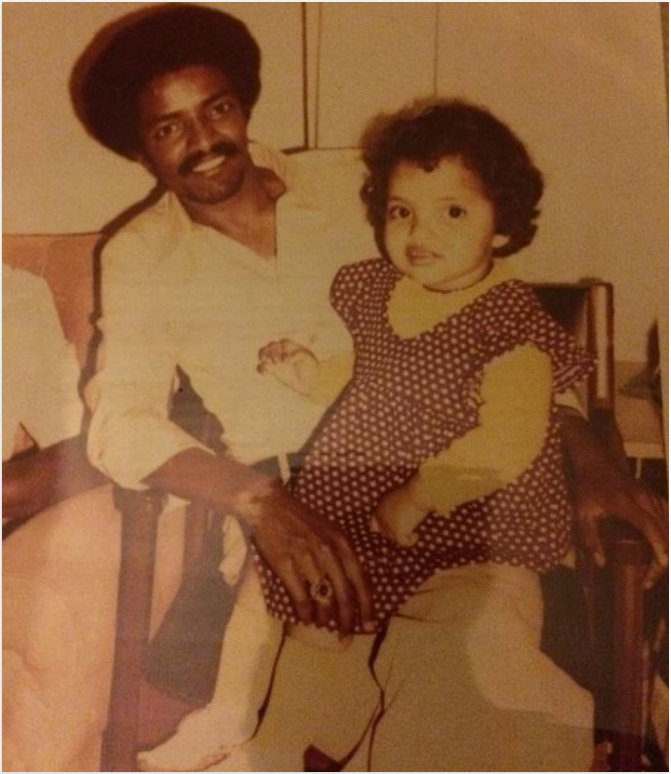 I would like to “talk” to you as a father of your own kids and at the same time address you as the leader of Ethiopia who carries responsibility for what your country has done to my country, Eritrea.

Even though I have had this conversation in my mind countless times for the last forty one (41) years with the many Ethiopian leaders before you, these are my first direct words to an Ethiopian leader.

My name is Kiki Tzeggai, and my husband - Berhane Tesfamariam - was murdered forty one (41) years ago by an Ethiopian government illegally occupying our country and murdering hundreds of thousands of our people at the time. He was murdered in cold blood, after about three weeks of continuous unspeakable torture.

There is simultaneously so much I have to say, yet so few words that are capable of doing the job. I wish – as per rules of this world - you would be talking to me and my little family as well as to the Eritrean people at large, from the podium of the UN and finally apologize for the pain Ethiopian occupation caused and inflicted upon the people of my nation.

Your country under previous Ethiopian governments like the one you lead at present, hated my husband and Eritrean fathers so much that they murdered tens of thousands of them. In the absence of an apology from your country for inflicting so much pain, we still feel the wrong being done over and over again.

Past Ethiopian governments and the one you lead at present, planned Berhane’s assassination for long; you had it set up for over three decades of my country’s occupation. Now you proudly and suddenly, announce that all you want is love. But we will not be fooled this time, even though I cannot bring him back. If you believe your plan will be a success, think again.

Berhane never hurt anyone. All the rage in your heart, he never felt for you or your kids. At times, I reached a point when I begged you would have killed him instantly because you were holding - not one - by many weapons` and he had none. The pain he went through and the kind of pain my kids and I feel to this day, walk parallel to each other.

We loved him so much. A few Ethiopians reached out to my pain, but they hold no power and never wished for him to be assassinated. While I learned to feel empathy for the Ethiopian people and give them the right to exist, you denied all that to me, to my children and to my people. Your government's utmost thoughtless selfishness seem to be your constant companion! You talk about peace, but you - as leader of your governments - have not acknowledged the hundreds of thousands - maybe a million, we are still counting - of Eritrean lives lost, you have never discussed peace with them and us, the surviving families.

Dr. Abiy, the intrusion from the country that you now lead completely changed our lives, destroyed our society and wounded all of us deeply. I cannot even describe to you how different my life would have been if it were not for the murder of my husband. 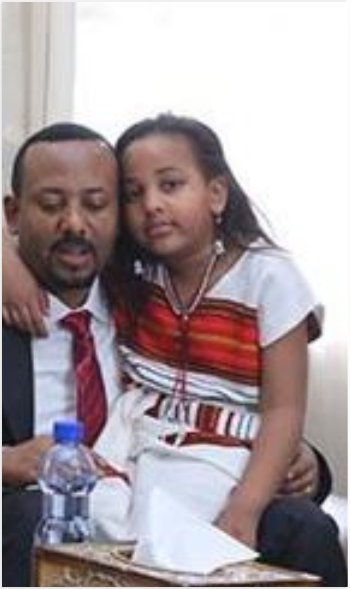 I look at this photo of you and your little girl.

Then I stare at the photo sitting on my piano of my own beautiful little girl and a father that loved her beyond words.

You will walk your little girl through life; Berhane was denied that right by Ethiopian regimes because he is Eritrean!

Often, I daydream of looking out of my window and see a father teaching his kids how to ride a bike. Father and daughter smiling at the flowers in our garden, father and son talking about football, getting one hug and then one more. The words you whisper to your girl in this photo, he would have loved to tell his kids.

Sometimes - in my search for peace - I wish he were alive and we become two living adults arguing about futility …. Anything! Just anything to have him with us! I wish we made amends over the petty argument we had the day before you sent an entire battalion armed to their teeth to pick up a father that was just starting his day by preparing a bottle of milk for his little ones.

We could have been the happy family Berhane and I dreamed of. He would be excited to see his grandchildren; the getting together on holidays, like so many other families around the world, yours included. I would have a birthday present tucked away for after dinner and a birthday cake on our kitchen counter, and I would smile for a hug reminding him and our daughter that the hairbrush did not belong in the kitchen. After putting the kids to bed, I would give him his present and I would hear the most peaceful man on earth reminding me that so many were going to bed hungry and we should have spent the money we spent on a gift on some groceries for families in need. All this is destroyed at a snap of your fingers because you - as a neighboring leader - just hate Eritrea and Eritreans!

These are questions I will never be able to answer; there are so many things I will never know. However, I do know this: if you are still burying your conscience in oblivion, if you still think that few non-sense words and smiles are all Eritrean families like mine need, please think again! Then our lives were disrupted by your occupation of Eritrea, now is the time to leave us alone and never cross the borders Berhane and our Martyrs died for. All is delineated perfectly in our minds and our hearts.

The difference between us and you Dr. Abiy? We will never hurt your little one and if someone does, we will stand by you to punish the person that hurts her. The difference between yours and my family, Dr. Abiy, is that no Eritrean regime will be allowed by the people of Eritrea and by the army of Eritrea, to invade your country and land you in torture cells for NO reason. We will not do that. Such sense of principle and love for humanity - in the midst of a just gone-by sad Father’s Day - is the difference!

We miss Berhane more than we can even begin to tell you. The menial daily stuff people take for granted in our house were a pen he left on our kitchen counter along his and his daughter’s favorite hairbrush. Do you brush your little one’s hair before shaking hands with the powerful of this world and send fake love messages to Eritreans Dr. Abiy? Do you?

My wish to you is that you hug and love your family more than you usually do on any given day, and I hope your conscience makes you think about Eritrean families like mine. We have children that grew up without a father, and that void has affected each of us very differently - but make no mistake - we each feel the void! For so long I filled mine with so many "whys" and only you can settle this.

Days - in our lives - are no longer than a butterfly's flap.

Leaving you with your conscience – if any – I will listen to the song Berhane sang for his kids some forty-one years ago before you assassinated him.

I hope you make your kids proud of a father that truly earned and deserved a Nobel Prize for Peace, and reached out to six million Eritreans and not a few selected Eritreans. Acknowledging the wrong will bring real peace between the people of Eritrea and Ethiopia. Until now, all you do is show us a make-believe peace, but honest peace is far from your agenda!

The war of attrition your government so slowly leads will have no winners!