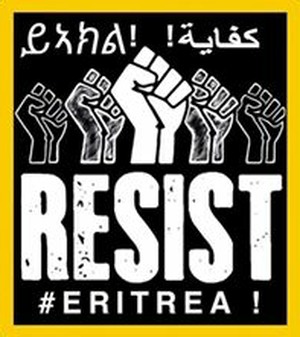 The Y’AKIL/ENOUGH movement can walk parallel to our Freedom Fighters movement fighting the Ethiopian occupation of Eritrea! The difference now is that this movement wants to captivate the momentum of an Eritrean civil march for human rights! The Y’AKIL movement is one lead by our young generation with strong support of elders in shaping a future path for our land that deserves paramount peace and democracy.

At the height of our Eritrean misery, the Y’AKIL/ENOUGH movement has drawn the young generations of Eritrea around the world, into a flurry of meetings and marches! The war this movement faces is a different level. Our young generations should have had a life of peace, of academy and travel to discover the world. Our martyrs offered their lives so we all could live a fruitful life in Eritrea. Instead, theirs is a life of full alert. They face a life of games within games.

All we wish for this movement for true freedom is that no one will be hurt. We wish for our young generations to hold only peace in the palm of their hands and evil never to cross their path! That they be the remedy of any ill bid towards our beloved Eritrea and their fight be worthy of our ancestors’ legacy! Eritrea is proud of you – members of the Y’AKIL movement – for recognizing those who are on the side of true freedom and share your heartfelt love for our land.

You are the constant in our walk for freedom and remind us that our culture asks us to share each bite of profits among Eritreans. For, one bite we will give it will come back to us ten folds over! The Y’AKIL movement has turned a flicker into a flame and will show us the way out of this blinding fog!

Our new generations understand that the real superiority is being able to stare at your enemy in the eyes and resist to draw a war weapon, instead to fight the right way and wait for the right moment to claim your birthrights, all while stretching an olive branch to your own that stand on the wrong path today!

You told us that the generation of our Tegadeltys/Freedom Fighters renders you brave and patient! Our Veterans fought a war that made them feel the warmth of their blood rushing through their noses and into their mouths! The road to becoming a fighter was no easy road. Each time you feel that time gets rough and it feels as if you are losing your way – please - follow a saying of our ancestors as a compass. "Making excuses for losing a fight you have not fought yet, is a definite way to never become winners”.

I will quote a valiant Eritrean Veteran - K. Tewolde – and how he explained the agony of our people; such agony you are relentlessly fighting to stop. He said: “Some try to defend the indefensible! They did not utter a word when Eritrean mothers made the Mediterranean Sea a maternity ward and the Sahara a non-sterile operating room where young Eritreans’’ kidneys were excised – for sale - without any anesthesia. When Eritrean remains were washed ashore like seaweed to the beaches of Libya and environs, shame on you to defend those who exposed our people to the elements. Our nation looks like one struck by a celestial asteroid and scattered in every direction!” K. Tewolde on Assenna website.

The Eritrean people is in a situation where none of us is equipped to deal with, but the Y’AKIL movement asks us to hold hands and believe that we will make it.; this movement has become our impressive catalysts for change.

World history has taught us that the most successful and impressive movements for human rights were lead by young generations leaning on the highly paid price by the old generation. If we think of the March on the Edmund Pettus Bridge in Salem, Alabama/USA, the Tiananmen Square movement in China, the Arab Spring that saw birth in Tunisia and spread all over the Arab world, we see that the Y’AKIL movement was born from frustration of a hijacked victory of our war for freedom, by economic miseries back home, human rights violations and an oppressive regime. The Eritrean youth has decided to take a wave for a pro-democracy outcome and said “ENOUGH/Y’AKIL/ይኣክል” to death in the deserts, enough of Eritrean organs harvesting, Enough of Eritrean mothers’ tears and Eritrean fathers’ agony! Just ENOUGH! Just Y’AKIL!

This movement works to inspire, organize and empower generations to come! The Y’AKIL movement is basing its strength on the belief that each Eritrean should have access to his/her land, also the belief for Eritrea to become a strong economy with clean air and no landmine endangering our farmers!

The Y’AKIL movement will be part of the Eritrean history as one movement that restored the belief that no single Eritrean owns the power to exile other Eritreans. We – Eritreans – belong to the land of our ancestors and should live to protect a land belonging to all of us. Eritrea is not a partition a father can give to his son. Eritrea is the land of six (6) millions Eritreans and we all have the right to feel our land beneath our feet. Each Eritrean has the birthright to be buried in our beloved land.

This movement can walk parallel to our Freedom Fighters’ movement during the Ethiopian occupation of Eritrea! The difference now is that this movement wants to captivate the momentum of an Eritrean civil march for human rights! The Y’AKIL movement is one lead by our young generations with strong support of the people in shaping a trail of democracy for Eritrea! May this movement be one that encompass similar movements in the world when seeking true freedom! Only this time, the fight is ours if we wish to take back our land.

Glory to ALL our Martyrs! They did not die to see their people exiled!