The positive of painful – Eritrean Veterans

The positive of painful –
Eritrean Veterans 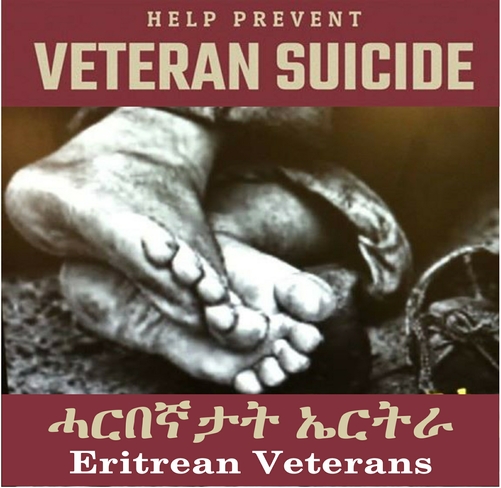 The positive of painful – Eritrean Veterans

I was shocked and – I admit – ignorant when a good friend of mine - a Veteran of our war for freedom - killed his superior and then aimed the gun at his mouth and blew his brain. He left two kids behind. To this day, it is hard to wrap my mind around this tragedy. The one shooting was my best friend and mentor. I have a hard time label him as “killer”. I have no problem blaming the neglect by the government after our war for freedom, one that left many Veterans wondering about their future. In a disdainful way, our independence left our Veterans lost. Many – today – languishing in hidden prisons and the rest had to introduce themselves to immigration offices abroad.

All our Veterans endured a counterinsurgency they did not expect, not during the war but during the after-war time. They faced ambushes led by betrayal of a system that was supposed to care of them. They felt the snipers shooting them with words that read “traitor, assassin, below-nothing, and more.” They faced extreme world-weariness! They also faced suicide! Let us not start with the psychological ramification of being abandoned by the very system supposed to be our very first government of a free Eritrea. They deployed not to defend their land, but they deployed towards the Sahara desert, the Sinai desert and the horrifying jails in Libya. The Immigration officers asking for a birth certificate they could not obtain because Eritrea asks for a 2% tax of an annual salary it never paid; our Veterans are not exempt!

They came home and had the option to either torture and kill their fellow Eritreans now prisoners, or commit suicide. The bloody liberation war for our land, offered a no-option of survival for our Veterans. They say that suicidal behavior is contagious; the problem being that our Veterans were never provided with a structure that would thank them and provide psychologists or create centers to develop a better way to respect Veterans’ needs. The base of Eritrea and Eritreans’ concern is …that there is no concern about our Veterans! We never bother to meet with them, to shake hands and say the simplest words human mind ever created THANK YOU! When I read about other countries’ Veterans, researches indicate that the suicide risk increases among those with significant battle’s injuries. What about ours?

Who among our highly educated Eritreans, ever bothered to make a study and research to meet our Veterans living in the diaspora? None to my knowledge! The makers of videos about Eritrean “Opposition groups” - popping up like never ending mushrooms on YouTube - and our journalists in the diaspora never bothered to organize round-tables, sit down with ALL groups of our Veterans to simply reconcile them and ask “How are you doing and what can I do for you? Because I am grateful” None is willing to create groups and volunteer to learn about the trauma still living within our Veterans’ minds, even when they pretend that all is well! The trauma and their own experiences could make us understand that some suffer from PTSD, that paralyses their minds and is shaped by the broader cultural and social views of trauma, war, loneliness and gender!

Several filmmakers have hammered the stereotype of a courageous Freedom Fighter, the reality that was once ours, now became the broken Veteran and has not reached the popular imagination. Our veterans have no options as alternative to their service. Could it be that we – Eritreans of the after war – started conflating veterans that commit suicide to our casualties of war? Are we comforting ourselves with the notion that they were volunteers to death anyway? There is no simplistic explanation for suicide. For, it is never the result of a single factor. However, I am certain that suicide of a veteran implies loneliness and lack of gratitude by the people they liberated from Ethiopian slavery! It must involve a story of psychological problems.

Is it too late for us? If suicide was a long list with options such as loneliness, financial problems, family betrayal, legal problems, failed relationship, etc. etc. Our Veterans could check each of those boxes as time goes by. Let us not read on Facebook that one of them left us. Let us be the embrace they are longing for. Eritrean Veterans are very close to each other; it is fascinating when we listen to their reminiscences of war. The bond they created once is still strong. The bond that unites them with us – their families and friends – is one we need to work hard on. Because at the very end, we are one platoon called Eritrea!

We need to look at our Veterans – be it ELF, EPLF, WARSAY Y’KAALO – as individuals that still consider themselves members of a unit. We need to respond the same way they did when they lost soldiers in the actual battlefield; they still double-check themselves for shrapnel wounds…..all we have to do is thank the Creator that some are left alive and promise that we will never let them feel lonely! Never should we let them clinch to the perception that trauma could lead them to isolation and lack of a certainty that all of them perceived upon returning home after the war ended. If today they see comrades taking their own life, what could prevent them from considering joining them?

I am certain that we all had plans for our Veterans, each of them being a member of our family. However, plans are fragile like little crystalline we carry from place to place cupped in a hand we try to maintain steady. Let us make sure that plans to benefit our Veterans become somewhat bigger and we promise to carry them, breathing even or hold them until we know our Veterans have reached a safe place.

Their bodies and minds in pain, they watched us grabbing freedom and leaving them behind. Eritrean Veterans never ask for pity! Therefore, they are silent. However, inevitably, they will shatter and their shards stick in each of us adding to our pain.

Our own, Eritrean Veterans!